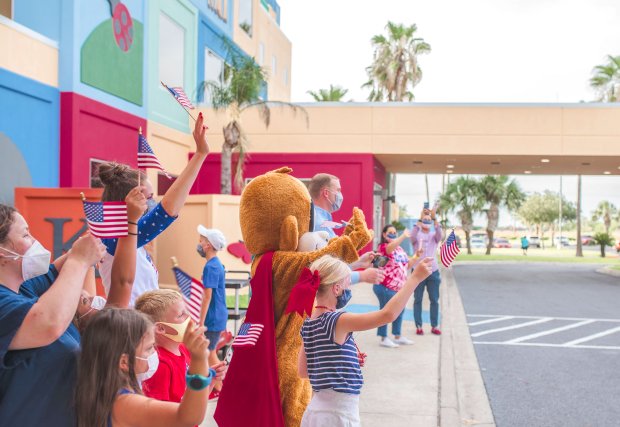 Small holiday gatherings are back, but not everyone is able to enjoy them alongside their loved ones. To help lift the spirits of the pediatric patients being hospitalized at South Texas Health System Children’s, the hospital teamed up with local truck club RGV Big Dawgs and first responders from the City of Edinburg for a colorful and festive Fourth of July parade.

On Saturday, July 3, more than 30 members of the truck club and Edinburg firefighters and police officers decked out their vehicles with red, white and blue lights, U.S. flags and Independence Day-inspired decorations to parade around the hospital grounds during sunset. The drivers made several rounds across the parking lot to spread the holiday spirit as the children being hospitalized and their families watched and waved from the hospital windows.

“The Fourth of July holiday is one of those special times when families get together to celebrate our nation’s independence by attending barbecues, fireworks shows and more. And, we didn’t want the pediatric patients in our care and their family members to miss out on the fun,” says Lance Ames, Chief Executive Officer, South Texas Health System Children’s, the Valley’s first dedicated children’s hospital. “So when the RGV Big Dawgs called and asked how they could help make this a special weekend for our patients, we put our wheels in motion and planned this special parade.”

Donating Toys to the Kids

In addition to parading around the South Texas Health System Edinburg campus, RGV Big Dawg members also made a large toy donation to the hospital. The collected toys will be distributed to the children in the hospital’s care during the Fourth of July weekend and beyond.

“It’s important for us to give back to the community, especially children. After the rollercoaster of the last year that was caused by the pandemic, we wanted to make this an extra special Fourth of July for the patients at South Texas Health System Children’s,” says Ricky Bobby, Vice President, RGV Big Dawgs, a local truck club with more than 300 members who participate in beach cleanups, fundraisers and more. “Along with the welcome distraction of enjoying the parade from their windows, we hope the patients get to enjoy just being kids while playing with their new toys.”

In all, RGV Big Dawgs donated more than 60 toys for the young girls and boys in the hospital’s care, including toy cars and trucks, dolls, puzzles and games.

Caring for Our Children

Learn more about the services offered at STHS Children's →