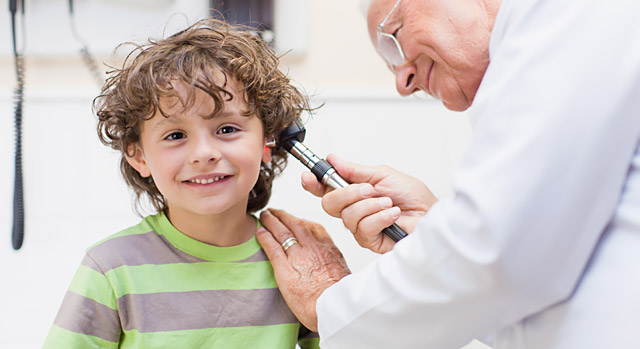 Otolaryngologists, or ear nose and throat physicians, are experts in a complex set of head and neck conditions. Otolaryngologists at South Texas Health System Children's are specialists in treating kids with common ailments such as ear infections and tonsillitis, as well as complex conditions such as hearing disorders.

Ear infections, also known as otitis media or middle ear inflammation, are the most frequently diagnosed disease in infants and young children according to The American Speech-Language-Hearing Association. Three out of four children will have at least one ear infection by their third birthday.

With an ear infection, the tubes inside the ears become clogged with fluid and mucus. Some common symptoms of ear infections include:

Ear infections can be treated with pain relievers, but severe infections may require antibiotics. Children who continue to get infections may need surgery to place small tubes inside one of both ears. This procedure is also known as myringotomy.

During surgery, a doctor makes a small cut in the eardrum and drains fluid that has collected there. Then, a small tube is inserted which restores pressure in the ear, prevents hearing loss and reduces the risk of future ear infections. Most children leave the hospital a few hours after the ear tubes are inserted.

The tonsils are glands at the back of your throat that help fight infections. Children from preschool age through their midteens are often diagnosed with tonsillitis, which occurs when the tonsils get infected. Doctors may recommend tonsillectomy or the surgical removal of the tonsils when:

Tonsillectomy typically takes about 20 minutes. Most children go home the same day as the surgery, but some may need to stay overnight for observation. Recovery takes about one to two weeks.

Sometimes a child's adenoid glands are also removed at the same time as the tonsils (adenoidectomy). The adenoids sit behind the nose above the roof of the mouth and can become enlarged, blocking your child's airway.

Some children are born with hearing disorders and others can develop hearing loss after birth as a result of a disease, a condition or an injury. Some conditions that can cause acquired hearing loss in children are: